Wesley Sneijder is one of the greatest in Dutch national football. Playing 134 matches in the national team, scoring 31 goals and highly decisive in 6 tournaments. He holds the record for most caps and was our captain for years. How do you pay a tribute to such a legend?

The greatest players are remembered for iconic moments, so we wanted to build a story around his no. 1 moment; obviously the header goal against Brazil in the quarter final of the World Cup in 2010, South Africa. Do you remember? First half we ran from pillar to post; only 0-1. But then something happened. During half time Wesley Sneijder stood up. A new team stept up the pitch for the second half. Sneijder scored the first goal with a cross that Julio Cesar missed. And then it happened. A corner by Arjen Robben, Dirk Kuyt who touches the ball with his head bringing it to Wesley Sneijder who puts it in the right corner. But that was not all. Do you remember Wesley running and tapping on his head? Bet you do. An iconic match, an iconic goal and an iconic cheer.

Together with the Dutch Football Federation (KNVB) we chose to turn this tapping on his head into the applause Wesley style. We asked his old coaches, teammates, closest friends and family to go back to that iconic moment in 2010. And finally giving their tribute to Wesley Sneijder, not by applauding, but by tapping on their head. Just like Sneijder did. Robben and Kuyt called it ‘an applause Wesley style’.

We wanted to show this film on a special moment on a special place. We chose to show him the film right after his goodbye match against Peru. In a setting where he moved so many people in The Netherlands;  in the living room watching tv. So right after the match we quickly build a cosy living room setting where his wife and kids took place, waiting for Wesley to join.

But it didn’t stop there. As the film gets close to it’s end, reaching it’s apotheose with everyone tapping on their head, the music of one of his favorite artist sounds through the speakers; the iconic song ‘Bloed, Zweet en Tranen’ by the late Andre Hazes. As we reach the end of the film, the well known chorus kicks in. And by surprise it’s live! Song by Andre Hazes jr. As the film ends with Andre Hazes jr. singing live, the crowd in the Johan Cruijff Arena took over the tapping on their head. And from there it fueled social media to do the same.

So if you’re reading this and you haven’t applauded for Wesley Sneijder yet, give your best applause Wesley style and share it with #wes134. 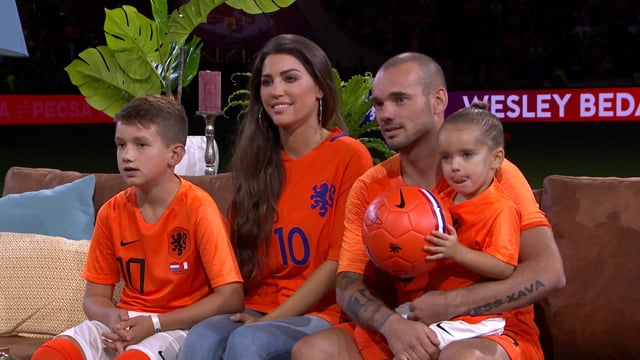 A hidden force with big impact

Growing up: One fall at a time